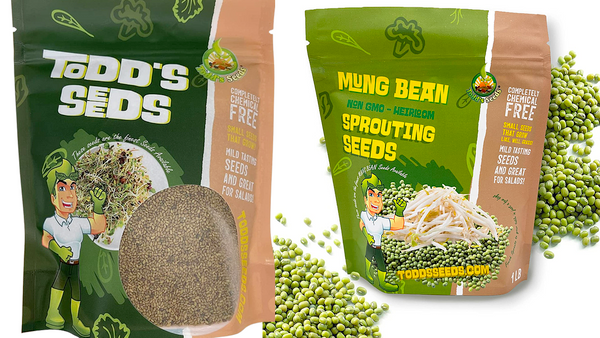 If you're looking for a "one-two" punch to shake things up a bit, then this alfalfa/mung bundle is for you!

For a crunchy and delicious addition to any stir fry, salad, or sandwich, you can grow mung bean sprouts at home using dried beans from Todd's Seeds and a couple of common household items.

We've all probably had Americanized Chinese takeout. Bean sprouts are a common ingredient. What we call bean sprouts is more likely mung bean seeds. What is a mung bean? And what other information about mung beans can we find? Let's find the answer!

What are Mung Beans? These beans, which are high in protein and contain between 22% to 28 percent, are rich in calcium, phosphorus, as well as other vitamins. Mung beans can be a good source of protein for people living in areas where animal protein is limited. Mung beans, which are part of the Legume family, are related to cowpea and adzuki.

Mung bean sprouts, also known as moong beans or bean sprouts, are made from sprouted mung beans. This legume is used in many Asian cuisines, including Thai, Lao, and Indian. It is mostly cultivated in Eastern and Southeastern Asia.

Mung bean sprouts have 31 calories per cup, are high in nutrients such as fiber, magnesium, potassium, vitamin C, K, and B. Mung beans can be cooked or eaten raw. However, cooking reduces the chance of bacteria contamination. Making your own mung beans is easy. All you have to do is soak the beans and allow them to sprout in a dark place. The sprouting process can take anywhere from one to two days to reach edible size within three to four days.

How to sprout Mung Beans
Homegrown mung beans can be made for fraction of the price you would pay to purchase already-grown sprouts in a grocery store.

Rinse your beans. To thoroughly rinse the mung beans, use a strainer or colander. To remove any dirt or dust, run water through the beans.

Soak the beans. Half a cup of mung bean should be used. Then, add one to one-and-a-half cups of cool water. To allow your beans to breathe, secure a cheesecloth or paper towel over the container's top with a rubber band. Allow beans to soak at room temperature for 8-12 hours until they begin to swell.

Rinse the beans. You can strain your beans the next day, or after at least eight hours. You can either pour the water from the top of the container through a cheesecloth or strain it using a strainer. Rinse the beans and drain any excess water.

Keep your beans. Either store the beans in their original container, or you can wrap them in cheesecloth or kitchen napkins and place them in a covered container. Keep them in a cool, dark place away from direct sunlight.

Continue the rinsing- and draining process. You should continue to rinse the beans and drain them once per day for two days until you see white sprouts. You can store the beans in a damp cloth. If it isn't, just check to make sure it's still damp. Sprinkle water on dried beans if they aren't. After they reach the desired length (which will most likely occur on day four), give them a final drain and rinse.

Dry the beans sprouts. Once you are ready to make your bean sprouts layer them on paper towels. Gently press the beans to remove excess water.

Keep the bean sprouts. To keep sprouts fresh and dry, store them in a plastic bag or container lined with paper towels. They should keep in the refrigerator for approximately two weeks.

Alfalfa, known as lucerne or Medicago sativa, is a plant that has been grown as feed for livestock for hundreds of years. It has long been prized for its incredible makeup of vitamins, minerals, and protein compared to just about anything else. While Alfalfa is part of the legume family, it is mostly considered an herb.

Alfalfa sprouts have long been called the "al-fal-fa" which means "Father of all foods". They consist of tiny, dark brown seeds that have sprouted young, slender shoots with one set of small leaves. Rich in antioxidants, and an excellent source of protein.