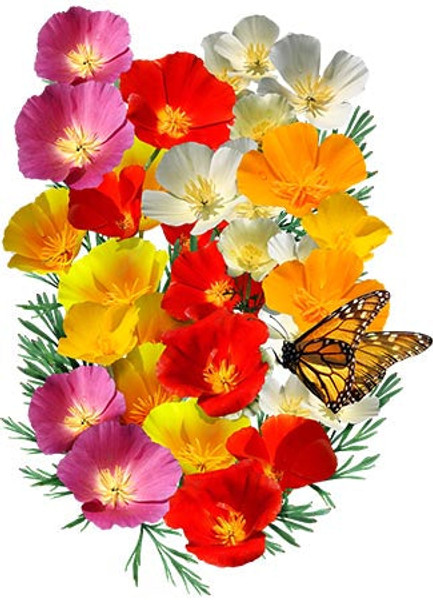 Poppy Mix - Eschscholzia Seed have a unique blueish gray foliage that makes the scarlet blossoms burst out even more in contrast. In order to obtain optimal results clip the flowers from the plant before the bud opens for cut flowers. They tend to thrive best in cooler weather, and will germinate between 10-21 days. For the best results, the soil should be somewhere between 60 and 65 degrees Fahrenheit.

When thinning seedlings out, cut off the tops with a pair of scissors, leaving between two and three of the healthiest plants per planting pellet. Once you do this, place them in pots until you see their second pair of leaves being to grow, which are their first "real" leaves. Once the seeds being to come up, you may notice some fungus on their leaves, which will prevent the growth of the plants. To avoid this, create good air circulation in the area they're being grown, either with a small fan or just brushing the leaves with your hands daily. Once the plants have begun to establish themselves, thin out the soil using sand, peat moss, or vermiculite. If you have milder winters, the seeds can be sown directly outdoors in the fall.